The story of Venetian glass is one of art history’s most fascinating tales. More than a thousand years old, it has captured the hearts of artists, royalty, noblemen, politicians, and entrepreneurs the world over. With epic accounts of obsession and passion, secrecy and intrigue, even betrayal, its story has grown to mythic proportions. It’s no wonder everyone’s making a fuss, given the extremes this mysterious art form has had to endure: racing to the top of its industry, dominating the post for centuries, then crumbling to near demise in the blink of an eye, enduring the pains of rejection, humiliation and defeat, then rising up again, almost by magic, finding the strength and the will to reclaim its rightful place in the universe (the glass universe, that is). If it sounds more like a love story than a historical narrative, that’s exactly what this is — a love story that started once upon a time, long, long ago in a far away place… 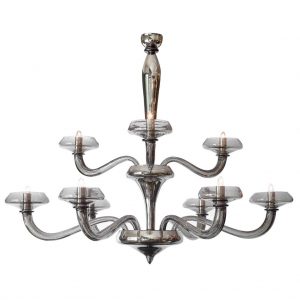 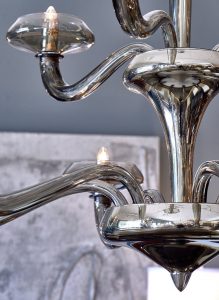 The Island of Murano (actually an archipelago connected by bridges) is located one mile north of Venice in the Laguna Veneta. Inhabited since the 5th century, it did not become the epicenter of glass making until the late 13th century when the Serenissima (the Republic of Venice) ordered all glass furnaces be moved from the central island of Venice to the island of Murano. The inherent fire hazard these ovens posed for a city constructed mostly of wood motivated the evacuation. Some argue that this was in fact a political move to protect the increasingly coveted secrets of glass making and to claim a monopoly on the industry. As a result, and quite by accident, this concentration of maestri, or master glassblowers, on this single tiny island created a rather competitive environment that resulted in very high-quality glass and the development of new techniques and innovative ideas for glass decoration. 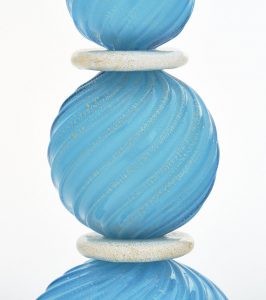 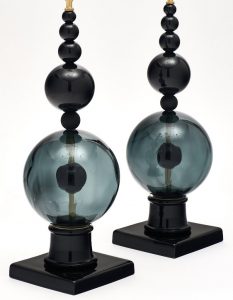 On Top of the World

The exportation of Murano glass became a major source of income for the Republic of Venice, and a major source of glass for all of Europe. By the 14th century the Venetians had reached the pinnacle of the industry, enjoying a virtual monopoly on the glass market. No other country could begin to compete with Murano glass — the Venetians alone held the secrets of making the most beautiful pieces. It was inimitably transparent, luminous, sparkling, thin, and light to the touch. It could be enameled, painted, tinted, or colored, engraved and fused, stretched and blown into a multitude of forms, decorated in infinite ways — some pieces were even mistaken for precious stones. Murano glass had ascended into the realm of a true art form, unsurpassable.

Nevertheless, success and power came at a price, and that price was shrewdly monitored by Venetian rulers. The Republic fiercely guarded trade secrets, making craftsmen veritable prisoners on the island. Although highly regarded in social circles and awarded privileges worthy of nobility, the maestri were regularly reminded by threat of death that leaving the island was strictly forbidden. A system of glass guilds was devised wherein each member was bound by a set of guild rules that set limits on production and distribution and that provided detailed guidelines for sales transactions. Guild members took on specific roles involved in the production of the glass; this division of labor led to an increase in productivity and quality of work. 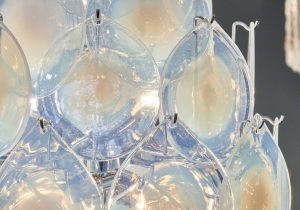 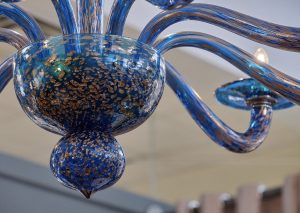 Although glass is an evolving art form in which each and every stage of the process contributes to the final beauty of a piece, the real secret of Venetian glass lies in the raw materials. The base ingredient is silica, the most common form of which is sand. While sand has the virtue of a relatively low melting point, it also bears the unfortunate fault of containing many impurities, which discolor the glass. Production of transparent, colorless glass, called cristallo for its resemblance to rock crystal, was extremely difficult, and consequently, limited, expensive, and highly sought after. This exquisite cristallo glass was, and still is, the basis of all Venetian glass design. To obtain perfect clarity of glass, the very best raw materials were needed. Ordinary sand was replaced by quartz pebbles called cogoli. These pebbles were repeatedly heated and dipped into cold water to remove impurities and then ground into a fine powder for melting.

The second most crucial ingredient to glass making is the fluxing agent. The fluxing agent enables the glass to melt at a lower temperature, thereby making it possible to melt glass in wood burning ovens made of clay. Venetians used a Levant soda ash called alume catino procured by burning plants from the Levantine region, and for which they held the sole monopoly.

Finally, manganese was added to the mix, which further inhibited colorization and had the added benefit of lengthening the time that glass would stay molten and pliable, allowing the glass workers more time and freedom to work on their designs. Once all the ingredients were mixed into a “batch”, the glass batch was heated, stirred, and cooled repeatedly until just right. Once a perfect, crystal-clear batch of molten glass was produced, it was passed on to the master glassblowers and glass cutters who then put their talents to work in search of perfection. Perfection, for the maestri, translated into the following: clarity of color, universal thickness, absolute symmetry, and balance, and last but not least, a unique design. This required a steady hand and an artist’s vision. Once the glass piece was produced, it was then transferred to yet another guild of artisans who specialized in decoration and painting. 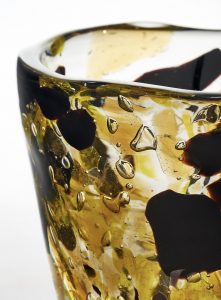 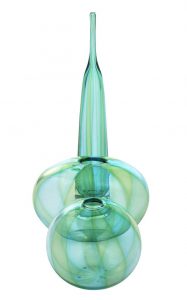 By the early 17th century, King Louis XIV of France had had all he could stand of the Venetians and their Murano glass monopoly. He successfully used his influence (and his money) to lure several fearless craftsmen to come work for him in Versailles and share their precious knowledge of glass. After that time in history, everything changed. The secrets were out and glassmaking flourished across Europe, creating formidable competition for the Venetians.

By the early 19th century, Napoleon had conquered Venice and handed her off to Austria — now the Vene-tians were in trouble. The Austrians, who favored Bohemian glass over Murano glass, severely restricted imports of raw materials to Venice, making it almost impossible for many of the foundries to make glass. By the mid-19th century, most of the glass shops were closed, with the few surviving ones reduced to making conteries or glass trading beads. In merely a few decades, the once-revered culture surrounding the Murano glassblowers had completely disappeared from the island. The age-old techniques and recipes that the Venetians had preciously preserved for hundreds of years were practically forgotten. 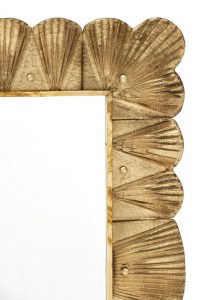 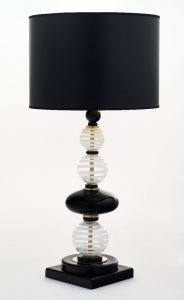 Rebirth of an Ancient Art

Some time later, things took a turn for the better. In 1854, six Italian brothers, sons of Pietro Toso, opened a new glass manufacturing company. The firm, Fratelli Toso, concentrated at first on domestic and pharmaceutical glass, but soon revealed they had much greater skills — and even greater ambitions.

In 1859 an industrious lawyer by the name of Antonio Salviati, arrived in Venice with an idea for a niche market: glass tiles to replace the old decaying mosaics all over Venice. His firm, Salivati dott. Antonio fu Barolerneo included the glass blower Lorenzo Radi – another artist aspiring to resurrect the traditional glass blowing techniques of the 15th century. Salviati’s skill at marketing his glass proved to be his true calling, and he quickly established new distribution channels in London and elsewhere after triumphant success at the London World Expo in 1862.

In 1864, Vincenzo Zanetti opened the Museo d’Arte Vetraria or Murano Glass Museum (which functioned as more of a school than a museum). He began teaching the lost glass blowing techniques that once made the Venetians famous. The Fratelli Toso made a magnificent glass chandelier for the inauguration of the Museum (still in place to this day) which some say marked the Venetians official re-entry into the glass blowing art industry. It was a spectacular work of art, reminiscent of Murano’s earlier years of glory.

By 1866, Venice was freed from Austrian rule and became a part of the Kingdom of Italy, which further facilitated the production and expansion of the glass industry. 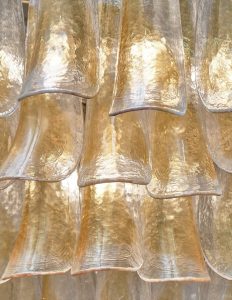 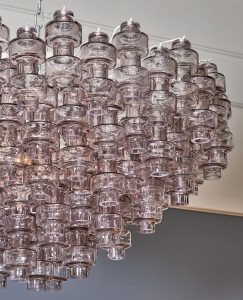 The reclaimed skills in glass blowing and the recent Art Nouveau influences of the time attracted all sorts of artist groups to Venice around the turn-of-the-century. During the first Biennale in Venice in 1895, artists from all over Europe came to challenge the maestri to stretch their talents and become “true artists” as opposed to just “artisans.” Informal artist groups were formed to generate new artistic ideas, and glass as an art form took off in all directions.

In 1921, Paolo Venini, a lawyer from Milan and Giacomo Cappellin, a Venetian born antiques dealer also from Milan, founded a new company by the name of Vetri Soffiati Muranesi Cappellin Venini & C. Their focus was on modern glass design and although Venini had no glass blowing experience, he was a skillful entrepreneur and expert collaborator with an interest in architecture. Venini had a keen sense of taste and an eye for talent and successfully attracted the most gifted artists, including the likes of Scarpa, Ponti and Bianconi. The partnership ended in 1925, but Venini stayed on, changing the name of the firm to Vetri Soffiati Muranesi Venini & C. Joined by Napoleon Martinuzzi, a sculptor who developed the pulegoso
technique in 1930 (the use of opaque glass), Venini began experimenting with controversial and unfore- seen techniques that broke completely with tradition. Their fervor caught on all over Murano and soon many glass designers were following their lead: Barovier, Seguso, Zecchin, and Fuga, just to name a few.

Threatened again by war in the 1940s, the industry managed to stay afloat and after World War II it was bustling again, bursting with pent up artistic energy, making the 1950s some of the most creative and innovative years the island of Murano has ever seen. Today, the works created during this time period are considered the most desirable by collectors and are in high demand. The Murano glass artists of that time collaborated with artists worldwide, including Pablo Picasso, Henry Moore, and Jean Cocteau. They also served as mentors to the artists who started the American Studio Glass Movement in the 1960s, such as Littleton and Labino.

Our gallery is home to some of the most remarkable Murano glass fixtures available. To see all of our pieces, click here.

Watch Jean-Marc share more on the history of Murano glass and the journey to acquire these beautiful pieces on their buying trips to Italy.