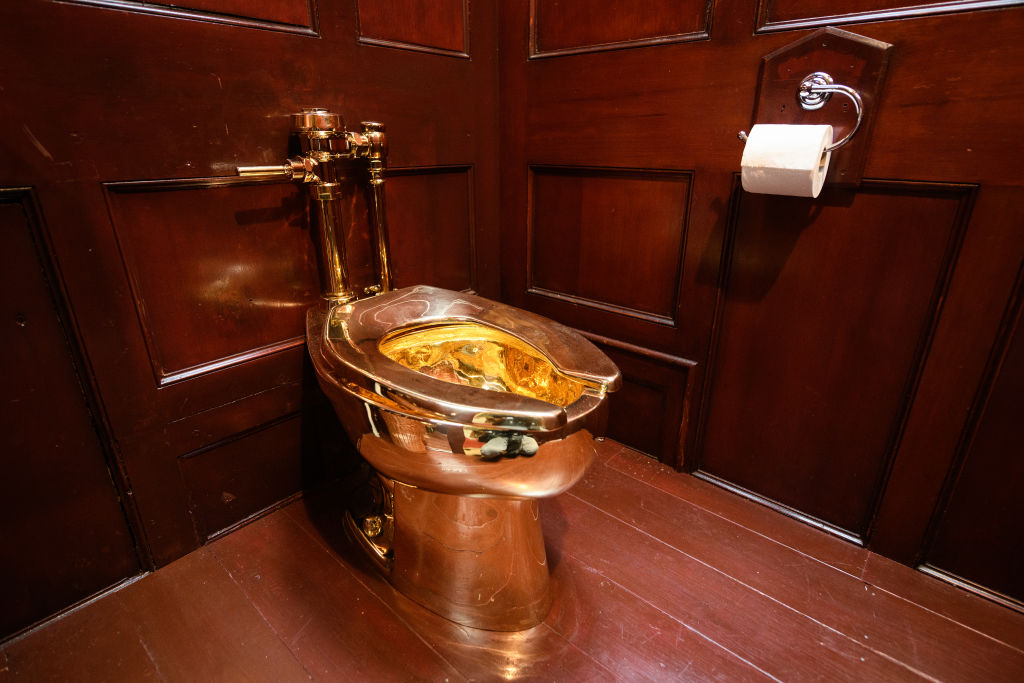 In 2016, artist Maurizio Cattelan installed a solid gold toilet entitled America at the Guggenheim Museum in New York. Unlike the majority of “untouchable” artwork at the Guggenheim, the toilet was actually functional to the public. America, which has a clearly unique art historical function, would prove to have an even greater legacy.

Upon The United State’s controversial presidential shift in 2016, the White House requested for the Guggenheim to loan the Trump administration a Van Gogh. In jest, the museum replied “no, but you can have this gold toilet instead.” Without a response from the White House, the toilet was relocated to England where it found a home at the Blenheim Palace, the birthplace of Winston Churchill. On September 14 of this year, the £1million toilet was stolen. 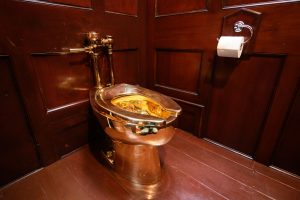 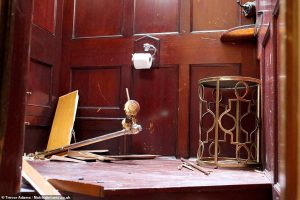 Aftermath of the toilet heist. Photo via Trevor Adams.

Vice spoke exclusively with the artist, Cattelan, about his thoughts on the heist:

What was your first thought upon hearing the news?
My first thought was that it was a prank. It took me a while, after a few checks, to come to the conclusion that it was true and that it wasn’t a surreal movie where, instead of the jewels of the crown, the thieves went away with a bloody toilet!

Do you think “America” is now more American because it was stolen?
The American Dream is still there to be chased and longed for as long we dream about money. Remember: no matter how expensive your meal, when you go to the toilet, golden or not, everything looks the same.

Do you have any idea who the thief might be?
There are several speculations but, so far, none of them have been strong leads. There are many rumors about a famous gang very active in the area, specialized in villas, but they have never done Blenheim before. Personally, I believe the cook and Miss Scarlett are the main suspects, but Professor Plum and the butler have a very weak alibi, too.

Do you have a wish for who the thief should be?
Dear Thieves, if you are reading this, I hope you’re not wearing Nikes and that your pusher serves you first quality stuff. How the hell the party was after the job, and how many days did it last, and what is the joke about your heist? Please let me know how much you like the piece, and how does it feel peeing on gold?

Do you wish that the toilet had ended up in Trump’s White House?
Maybe Blenheim is not the White House, but still a place with a lot of history and a fair amount of ghosts. America was installed in Churchill’s bathroom, a very humble place considering the size of the Palace. And if you find yourself in trouble, just follow what Sir Winston said: if you’re going through hell, keep going.

Do you wish they’d stolen another work instead of “America”?
Do I wish to have my house set on fire instead of having my car stolen? None of the two, if I may!

In a press conference last Saturday, Police investigators said a 66-year-old man has been arrested “in connection with this incident,” and the police believe the burglars used two vehicles. The artwork, however, has not been recovered and the investigation remains ongoing.