From the Middle Ages to Contemporary Art

Until the end of October 2022, the grounds of the Donjon de Vez in Picardy, France are host to spectacular contemporary works of architecture from some of the biggest firms and artists working today. Set against the backdrop of the Middle Ages dungeon, the Donjon de Vez has long been home to modernist pieces bringing new life to the castle. The current exhibition titled “Architects’ Huts” particularly draws the eye to the future by juxtaposing cabin like structures with the stone of the old world. 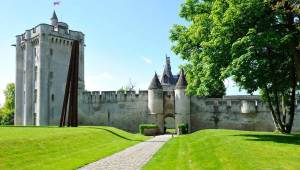 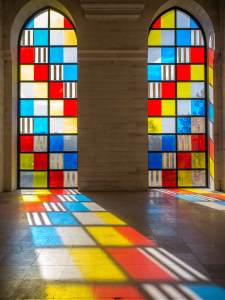 The Donjon de Vez is the original keep or dungeon of the Vez Castle. It was built around 1390 by Jean de Vez and is still standing, while the castle and chapel on the grounds no longer remain intact. Acquired several decades ago by auctioneer Francis Briest, the keep has continued to bring in works that add life and surprise to the four story building. Only an hour and a half north of Paris, it is now home to many pieces of art, stained glass, and sculpture. 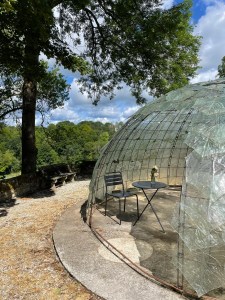 The Donjon de Vez describes the models and cabins as “real gestures, on the border between art and architecture: the reduction of proportions engages more creativity and freedom, and calls for a renewal of the design of the habitat. The personal style and imagination of each architect are deployed and echo contemporary ecological concerns regarding the rationalization of materials, means and living spaces. About fifteen creations are exhibited, allowing you to play with scales and dream of futuristic and utopian cities.” 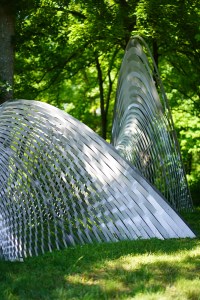 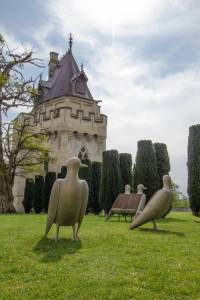 Grounds of the Donjon de Vez, courtesy of Jardinez France 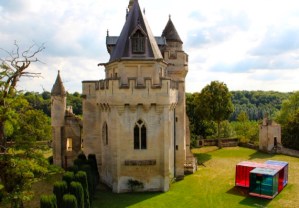 Archival photo of art at the castle, courtesy of Carlos Cruz-Diez