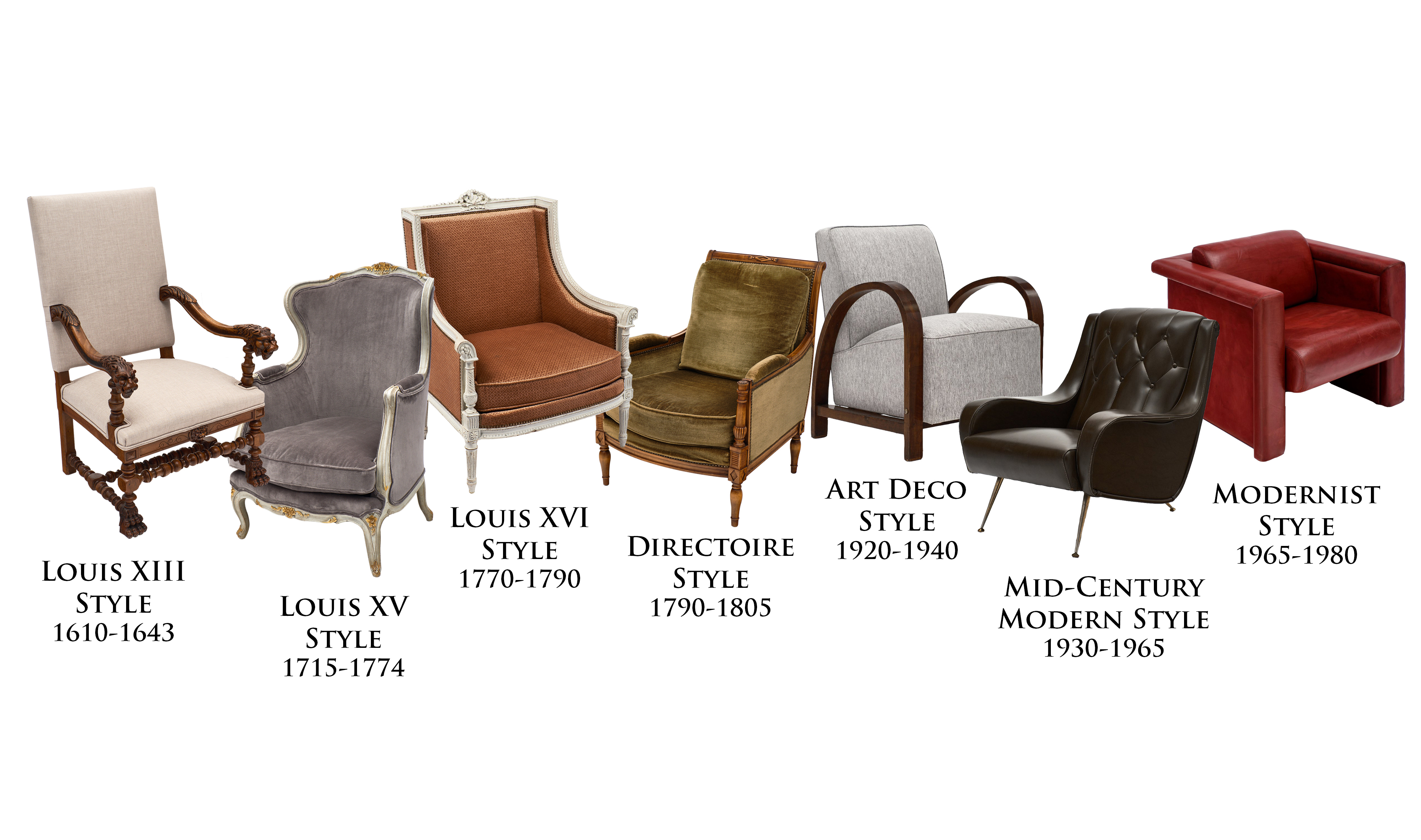 French Furniture Through the Ages

The Louis XVI period marked a return to symmetry, straight lines and classical ornamentation. In 1748, the unearthing of Pompeii brought about a classical revival in furniture making. This Neo-Classical style offered a contrasting response to the Rococo of Louis XV which came to be thought of as frivolous.

While the motifs of the natural world survived (garlands, urns, laurels, dolphins and eagles), they were paired with geometric designs. One of the popular woods of the period was mahogany, which had to be imported and was therefore used only for fine furniture. Instead of the cabriole leg of the Régence and Louis XV periods, a straight, tapered and (often) fluted leg was preferred. Case pieces, such as commodes and buffets, became more angular. Chairs of the period were fashioned in a wide variety of styles. The medallion and oval backed chairs are the most notable, although lyre or vase shaped backs were also common.

For the first time, during the Louis XVI period, chairs were made for solely for decorative purposes rather than comfort or function. 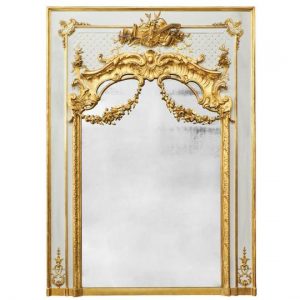 Following the French Revolution and execution of Louis XVI there was a natural break from the lavish royal style. The monarchy was gone and France was governed by the Directoire executif (executive directory), from which the name of the style derives. The Directoire period is much more subdued and austere (although many of the themes of the simpler late Louis XVI furniture continued). Geometric patterns were less extravagant. Motifs include arabesque and Etruscan themes, wreaths, torches, and other warlike emblems (reminiscent of the Revolution).

Overall, the circumstances of the war led to a decline in furniture quality and the availability of materials. Brass was often used in place of gilt-bronze and imported woods such as rosewood and mahogany were scarce. Most Directoire pieces were made of walnut and other fruitwoods which could be found in France. 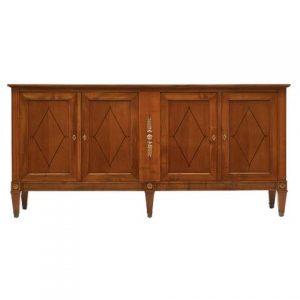 After many years of political instability, Napoleon Bonaparte crowned himself emperor of France in 1804. As the Empire period began, the economy boomed and a new haute bourgeois aristocracy who would desire fine furniture and decoration appeared.

Empire furniture is usually large and architectural elements such as columns and pilasters are common. Mahogany and rosewood, as well as ebonized wood were quite popular. Furniture would be decorated with brass and ormolu and inlaid with ivory or mother of pearl. Upholstering was done with embroidered fabrics and heavy brocade, often in bold stripes. Strong symmetrical designs replaced ornate carvings and rounded romantic shapes. Chairs often had stiff, square or rectangular backs and animal claw feet.

In its plainest form, Empire style is dignified and striking; however, furniture and decorative arts of the period are notable for exhibiting a confusion of motifs. Artisans of the time were still heavily influenced by classical Greek and Roman design. A Napoleonic campaign into Egypt brought back a desire for Egyptian motifs, such as sphinxes. Napoleonic symbols were used regularly, specifically the initial “N”, the emperor’s monogram, and the bee(his emblem). Other design elements regularly found in Empire pieces are dolphins, swans, and mythical creatures. 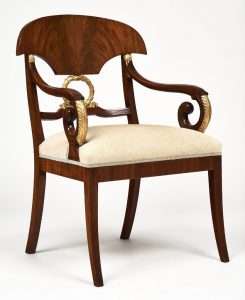 Following the defeat and abdication of Napoleon in 1814, France restored the monarchy and Charles X took the throne. The royalty and aristocracy desired a return to luxury and opulence and there was a distinct shift to delicate, rounded forms, and fine decoration in furniture. The large form and geometric design of Empire furniture continued but lighter woods, such aselm and ash, were introduced and used with, or instead of, mahogany.

Coinciding with the reinstatement of the monarchy was the Industrial Revolution. An increasingly prosperous middle class brought about a heightened demand for furniture and innovations in manufacturing made that possible with new methods for furniture making. 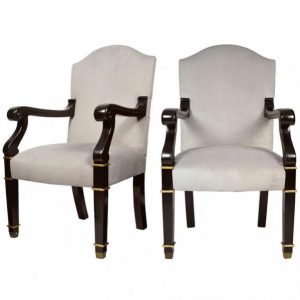 Charles X was overthrown in 1830 and Louis Philippe, Duke of Orleans, became France’s new leader. He managed both royalists to his right and radicals to the left, while sympathizing with the bourgeois class.

Louis Philippe period furniture maintained the simple, rounded lines of the Restoration, but with less ornamentation. The function of furniture was of prime importance. Walnut and mahogany were the predominant woods. Tables and commodes often had marble tops. A characteristic trait of case pieces in the Louis Philippe style is the “doucine“(soft curve). At the top of buffets, chests, armoires and secretaries a slight curvature is often seen, lending softness to the otherwise straight lines common of the period. 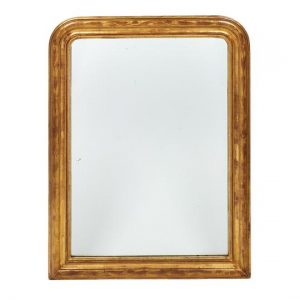 The “Second Empire” came about when Louis Napoleon (Napoleon Bonaparte’s nephew) declared himself emperor as Napoleon III. Drawing on the past 500 years of French style, the Napoleon III style is an eclectic and somewhat ostentatious mix. Often several furniture styles were mixed for a single piece of furniture. Whimsical shapes, painted wood and mother of pearl were common. Dark woods, ebonized or “japanned” woods, cast iron, paper maché and ivory inlay were implemented. Cabinets, commodes and desks crafted in the manner of Boulle and similar renowned craftsmen of the 18th century became a feature of fashionable salons, though such pieces tended to lack the finesse of the original. 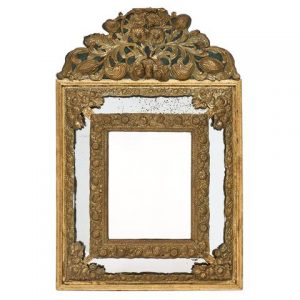 The term “Art Deco” was coined after the name of the prestigious French Decorative Arts Expo held in Paris in 1925: “L’Exposition Internationale des Arts Décoratif et Industriels Modernes”. This post-war exposition, intent on showing the world that France would once again lead the way in creating new standards of taste in fine and decorative art, served as a showcase for the most talented designers and craftsmen of the time, and officially launched the period of an emerging style that would become known as the Art Deco Period (1925-1940).

Inspired by cubist artists of the time (Picasso, Braques, Gris…), Egyptian art and French colonial art, the designs of the Art Deco period are characterized by clean lines, exotic woods, bold colors and unusual materials such as glass and steel. The graceful curves of the early 20th century Art Nouveau period were suddenly replaced with a new kind of angularity. Geometrical shapes, symmetry and streamlined designs offered a stark contrast to the sinuous, organic feel of the Art Nouveau period. Craftsmen preferred imported materials such as Macassar, rosewood and ebonized wood; ivory and bone became materials of choice for intricate marquetry designs. Leather, chrome and glass were also being used in unusual ways. French Art Deco design introduced an exciting new sense of exoticism to the decorative arts, serving as an international display of France’s tolerance for and acceptance of other cultures. This bold new style, a quintessential symbol of fine taste, would endure for over 20 years, and prove to be the ultimate reference in the history of modern furniture design. 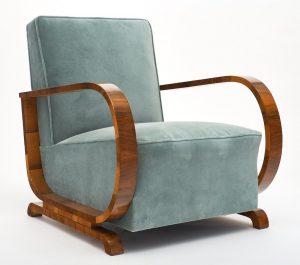 Originating in the 1940s-1960s, the Mid-Century Modern movement was based in functionality, simplicity, and an organic elegance. Many designers of the period championed the concept that good design could be for everyone, not just the wealthy.

The material itself was used to create the design and dynamic beauty of the piece, instead of relying on decorative ornamentation. New technologies gave way to new materials, such as vinyl and resin. Ray and Charles Eames, designers whose pieces have continued to symbolize the Mid-Century movement, wanted to produce furniture that was not just the best it could be, but also could be used by “the greatest number of people for the least amount of money.” 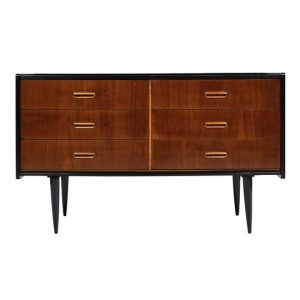